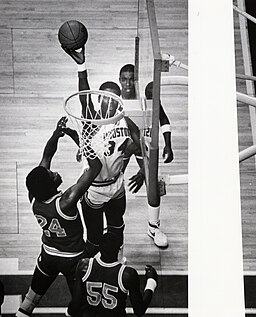 In last month’s mailbag, we took a quick look at why the NBA doesn’t have as many big men with post moves as it used to.

This question deserves a deeper inspection.

Here’s the question one more time:

Q: It seems like there aren’t as many post scorers in the NBA as there used to be. Why do you think that is? Are players not as skilled as they were in the past?
— Brian

To really understand what’s happened, we have to do a bit of role-playing.

Your name is Brian.

You’ve been playing basketball for years and are reasonably gifted.

Now, we know from Malcolm Gladwell that it takes hours and hours of deliberate practice over time to develop (and eventually master) a skill.

Again, you’re Brian. Up until this point, you’ve played almost exclusively against kids who are a foot or more shorter than you. They’re not much of a challenge. You’re running around them and dunking on their heads. You’re not deliberately practicing low post footwork. It’s not happening here.

So now you’re in high school.

The next two years of high school play are going to be a wash for your post skills, for one or both of the following reasons:

1.) The competition isn’t much better than what you faced in middle school. Unless you’re in a major city, chances are this will be the case, and you won’t really be challenged by opposing big men.

2.) Your junior and senior teammates will be the focus of your team’s offense every night. Maybe they’re really, really good and deserve to be. Maybe they’re monopolizing the ball in the hope of getting a scholarship. Maybe somewhere in between. Either way, you’re not getting many reps.

Practice isn’t much more helpful. You’re mostly preparing for game situations–which doesn’t include your post game–and chances are you don’t have a teammate with the right tools to challenge you in practice anyway.

(Hoping grassroots play is the answer? Good luck with that. Anyone who’s watched grassroots basketball knows how guard-oriented it is. Forwards aren’t getting consistent post touches there.)

How many high school basketball coaches–even successful ones–do you think are good at teaching post moves? Close to good enough to get you ready to use those skills in college basketball games?

Seriously, think about it.

So, you have a coach who probably isn’t equipped to help you much in that area, and you probably don’t have teammates to match up against you in that area anyway.

And unless your high school plays strong competition, you’re likely not getting much of an in-game challenge anyway.

Nevertheless, you’ve been really successful because of your size, skills, and athleticism, and everyone you know constantly tells you how great you are.

Your four high school years are over.

You’re 18 years old. You’ve since grown to 6’11” and received a scholarship to play in a high-major college basketball conference.

Surely you have a better coach now who can work with you on your post game all the time!

Per NCAA rules, teams can’t start practicing until six weeks before the start of the season–and they’re only allowed 30 practices in those six weeks.

If you were the coach of a high-major college basketball team, expected to compete for a national championship, with guys having graduated and new players coming in, and you only had six weeks to get everyone ready to play together … how much individualized attention would you give to a freshman whose mostly undeveloped skills aren’t crucial to your team winning games this year?

(And remember, the NCAA also limits how much time a team can spend practicing each week during the season.)

Now you, Brian, aren’t getting opportunities in practice to work much on your post skills, because there’s such a limited amount of time and those skills understandably aren’t a priority for the team’s success.

And as you’re an underclassmen, you’re not getting many scoring reps in-game anyway, let alone to use skills you haven’t even been working on in practice. And when you do get opportunities in game, you’re not going to risk embarrassing yourself trying to bust out skills you don’t really have.

But maybe it’s all worth it?

After all, you’re playing on a national stage for a year or two, often deep into March, and getting lots of exposure. And thanks to your other tools, you’re putting up numbers off putbacks and basket cuts, and notching enough rebounds and blocked shots to get a lot of attention.

So you get drafted in the first round after your freshman or sophomore year.

(Remember, at no point so far have you had much deliberate in-game practice on your post moves, and it would be silly of you to turn down guaranteed millions to stay in school and work on your game more.)

Why am I stressing in-game? I need to make a point here.

All due respect to Hakeem Olajuwon and other player development coaches, because that type of individualized off-season instruction can be very valuable, but it isn’t a silver bullet either.

To become a reliable back to the basket scorer in games, you have to actually practice those skills in game situations. Working with a trainer one-on-one–regardless of how good the trainer is–isn’t going to get around that.

They may teach you great moves, but unless you get lots of deliberate practice applying those skills in game situations, they won’t translate.

Anyway, now you’re in the NBA–congrats!

Maybe you’re thinking that because you don’t have to worry about class, or NCAA rules, you’ll have a lot more time to practice your post moves during the season?

NBA teams pack 82 games into a short schedule and spend lots of time on the road. Players get banged up and worn down. Coaches always have a game or two to be preparing for.

There’s not much time in-season to practice, let alone in an individualized way.

Plus, now you’re on the NBA level, so defenses are ridiculously athletic and quick, and they can expertly sneak in and disrupt you in half a second whenever you do try to post up in games.

You’re really between a rock and a hard place now if you want to be a back to the basket scorer.

You’re in the NBA, so you’ve accomplished that dream, but you don’t really have a great option to help you get better in the post.

You don’t have much practice time to work with.

You can’t really practice post moves in games, because your team is trying to win, and giving you (a rookie) opportunities to keep screwing up isn’t a priority.

Besides, your post scoring is probably the 17th best offensive option your team has when you’re on the floor. Why would they go to you down there?

(Can you imagine the Thunder running post plays for Steven Adams while Kevin Durant or Russell Westbrook is on the floor?)

And as I mentioned in the mailbag, post scoring overall isn’t as high-percentage of a play as it used to be, compared to other play types. With how quickly and easily defenses can swarm post players now, offenses have an easier time scoring in other ways.

So this is how it happens. The landscape has in many ways evolved against the development of the back to the basket big man.